A warm welcome to Monique Steele: a Jamaican-born digital artist 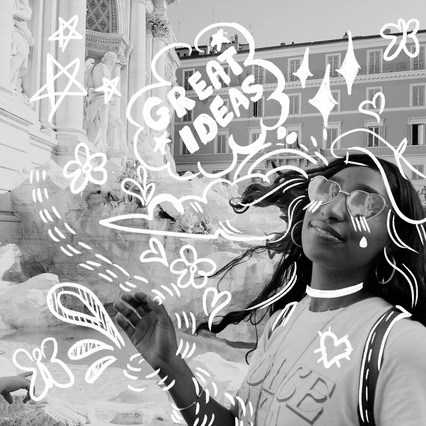 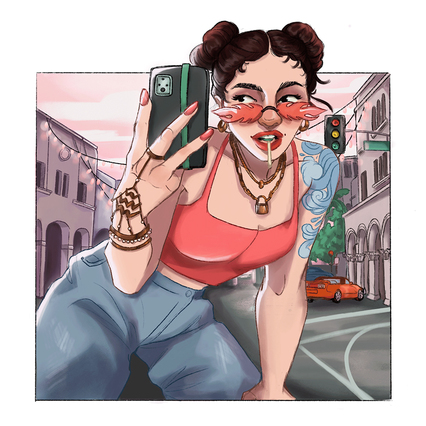 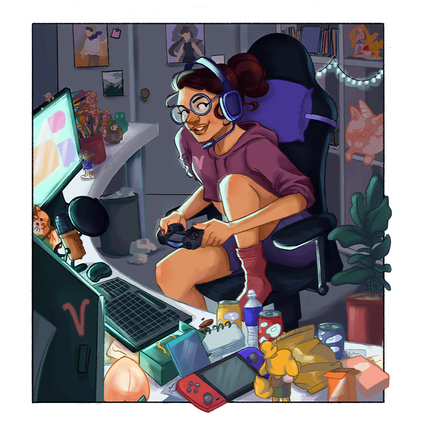 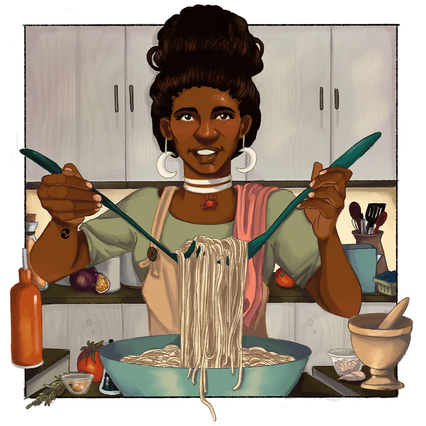 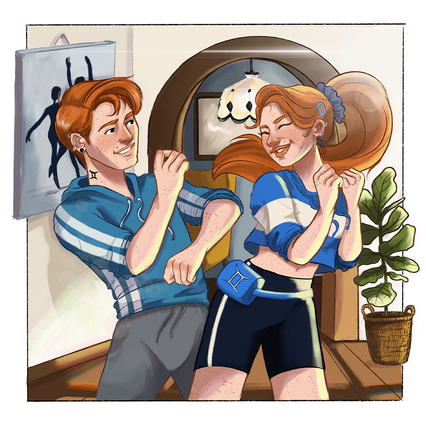 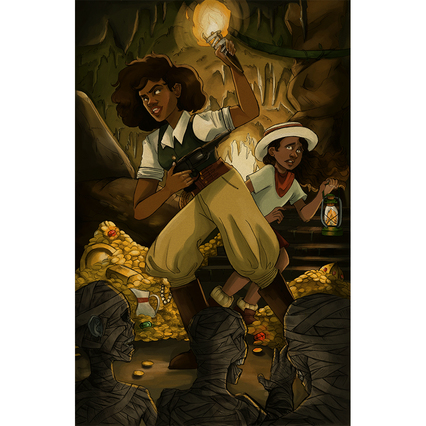 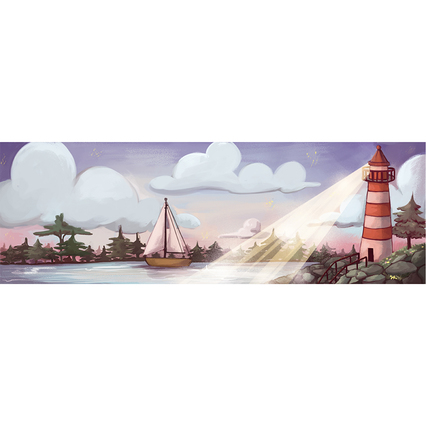 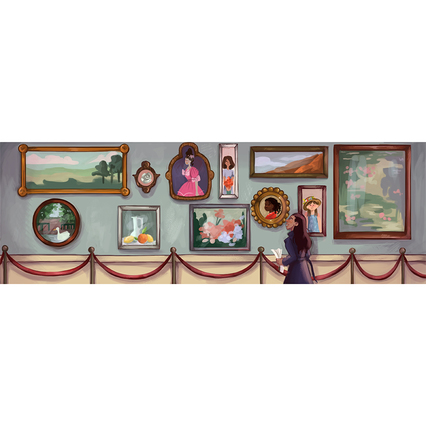 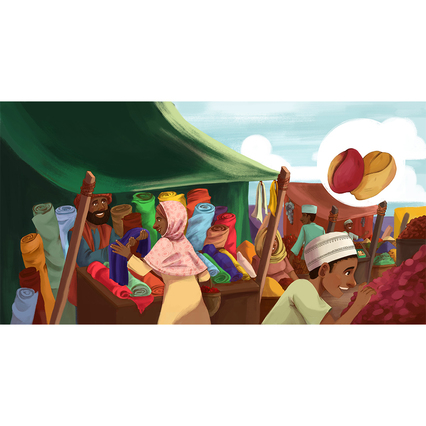 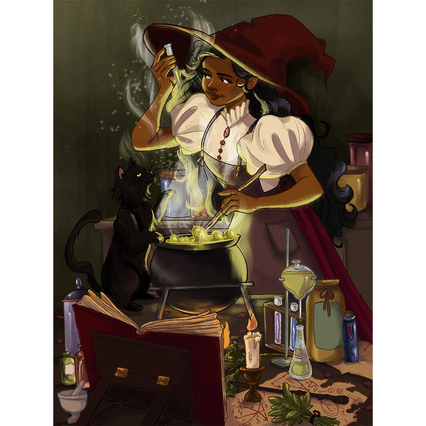 Monique Steele is a Jamaican-born illustrator currently residing in the small pocket of reality in-between time and space. A digital artist, her work normally consists of bright colors, and strong line work and features subjects such as empowered women in history, fun adventures, and magic. When she’s not drawing famous Queens in history or women in elaborate gowns you can find her deeply mired in the comings and goings of pop culture, exploring mystical new worlds in literature, and lamenting no longer living the “island girl” lifestyle while (still) attempting to refine her spicy foods palette.

When did you start illustrating?

Professionally, I have been illustrating since I graduated from Ringling College of Art and Design in 2014. In all truth, I have always been drawing it’s the longest hobby I’ve ever kept up with.

Who has been the most supportive in your illustration career, perhaps your teacher, family, friends?

While so many people in my life have supported me in my career, I would have to give this one to my friends, specifically all my friends who are creators themselves. I think the fact that we are all in this artistic hustle together means they have been uniquely capable to understand the pains and triumphs that make up an art career. They have been great motivators for me sometimes in just seeing their own successes I’m driven to push for better. They have also been amazing cheerleaders for when I have also met some measure of success. They have been great sounding boards for questions or struggles I might have along the way and I am very fortunate to have a community of people who understand the creative and artistic journey who push me the way have.

Did you always think art was something that was going to be a major part of your life?

I definitely didn’t think I would end up as an artist. As a kid, I was always told the thing to be was something within a more traditional career job like a lawyer or something in the medical field. It wasn’t until high school when a friend pointed out that one day I might not have time for my art hobby that it dawned on me. I didn’t really want the arts to be something I used to do I wanted it to be something I always did. And now, many art classes and one college degree later, here we are.

What is your favourite subject matter to illustrate?

I absolutely love drawing characters and costumes most of all, that seems like a very general answer but I just find people so fascinating to create. Coming up with their personalities and trying to show that in the way I have chosen to dress them in a piece or how they hold themselves in a pose is such a fun experience. When making these characters it feels like I’m also discovering them for the first time and in many ways, these characters I have created are a reflection of the people I know and see around me and reflections of my own tastes and personality taken apart and pieced back together in new, compelling ways that I wouldn’t have thought of if I had never put pen to paper.

How would you describe your style?

I have a hard time trying to figure out what my style would be called. I think a lot of my work is very bright and bubbly and colourful. Even when drawing fan art from horror movies I still try to make it bubbly in some way. I think a big reason for that is that most of my art stems from wanting to draw things I enjoy or find beautiful so a lot of my art, I think, reflects the same feeling.

What is your favorite collaboration to date?

My favourite collaboration was something I did with a reporter at Buzzfeed. The assignment was to imagine what Ariel from “The Little Mermaid” would look like in different ocean environments. The journalist, Claire De Louraille, worked with an aquatic evolutionary scientist and created a written profile of what Ariel would evolve to look like and I painted over different versions of Ariel to fit the descriptions. This wasn’t my most illustration-heavy endeavour but it was so fun to recreate this beloved character in ways that no one, including myself, had even thought of.

What interested you about being represented by Illo Agency?

I liked that the people behind the illo agency seemed genuinely in support of me as an artist and wanted to help me grow. I felt as though they were fans of my artwork and what I could do and saw the potential in me as an artist. That’s the type of support that I was looking for in an agency relationship. I really wanted to feel as though the agency I’m with was invested in my art and journey as much as I am.

Do you have a favourite author, film director, or designer?

I’m one of those people with a lot of favourites. I have a hard time just picking one of anything! In recent years I have really enjoyed the “Ember in the Ashes series” by Sabaa Tahir and also Leigh Bardugo’s “Grishaverse” books specifically the Six of Crows duology. They’re both Young/New Adult Fantasies set in fictional worlds. I also really liked “Legendborn” by Tracey Deonn which is a modern-day fantasy but one in which I saw a lot of myself in that character which endeared me to it immediately. Something that I count as one of my all-time favourites and as an inspiration artistically is the comic series “ Delilah Dirk” by Tony Cliff it’s a swashbuckling adventure tale, which is a genre I have always been drawn to as a kid. All the books are so beautifully illustrated as well so I could spend ages studying a single panel. I hope to create something like that one day. And my favourite of all favourites is Beyonce, naturally. Her work ethic and her artistic vision and reinvention and reinterpretation of her musical stylings and aesthetic have pushed me to keep trying new ways to push my art and myself within my art. Shout out to the beyhive!

Are you working on any personal projects you can share with us?

I recently wrapped up a personal project which was an illustration series where I depicted each of the zodiac signs as different types of social media influencers, which was very fun to do. I had to figure out a character based solely on the descriptions typical of each sign which was a cool character design experiment for me. I haven’t started work on a new project as yet but I’m thinking of doing something with mythical creatures or famous tales in folklore.

Do you listen to podcasts? If so, do you have a favourite?

I love podcasts, I have a couple in constant rotation. The podcast “The Read” is great if you want to hear two friends talk about everything pop culture and media. I also enjoy “Scam Goddess” which is like a true-crime podcast but instead of murder and gore its about robbers and scams and I also recently have gotten into one called “Ridiculous Romance” which is about famous romantic couples in history.

If you have any questions or a specific project in mind, please do get in touch: [email protected]

Carolina Altavilla's Smart Designs on the cover of Academic Journal, The Lancet