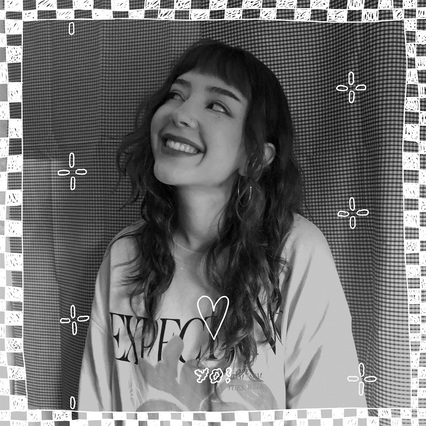 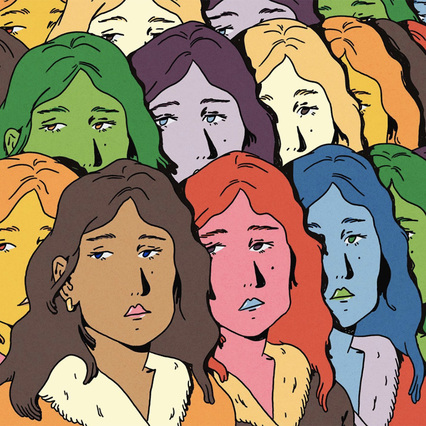 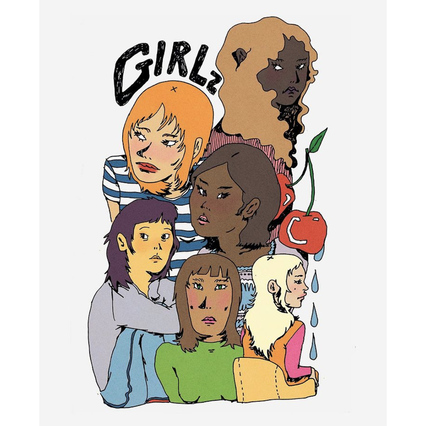 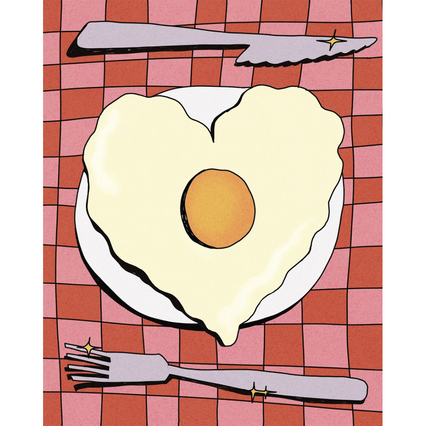 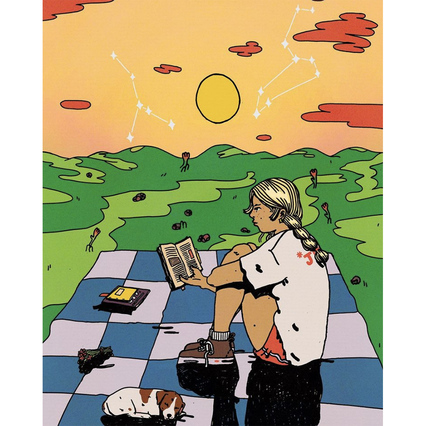 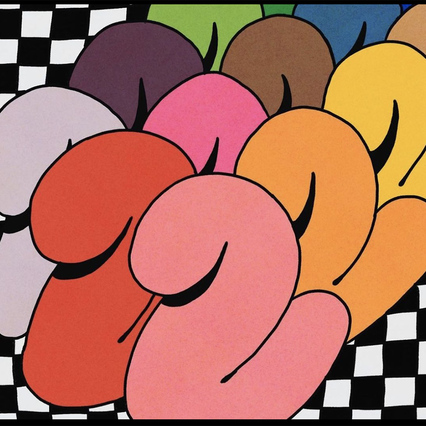 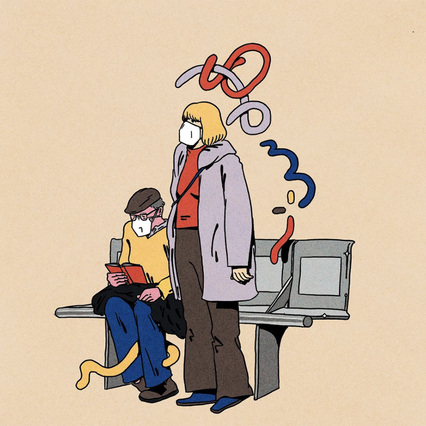 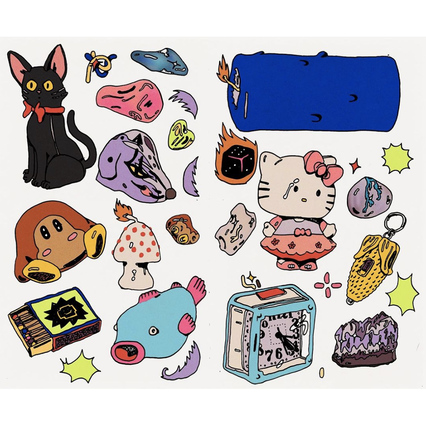 Introducing the inimitable Harriet Yakub, first generation Irish in a Ukrainian family, Harriet has always been influenced by the contrasting cultures surrounding her from birth. This has led her to her unique and stylised image-making. She always starts with strong line-work, often traditional, which is later placed into colour-rich digital formats, and if appropriate to the brief, she adds another layer of tactility by bringing in playful collage.

Harriet studied illustration in NCAD and began working freelance before completing her degree. It’s Nice That named Harriet in their Next Generation continued. She has also received a Yellow Pencil from D&AD for her creative campaign and received multiple awards including recognition for her moving image work and use of illustration in design from IDI. Harriet thrives in an environment where she has a brief to react to both visually and conceptually.

When did you start illustrating?

I’m not sure if I can give a time to date the beginning of my illustration journey, it’s something I’ve always envisioned myself doing. As a small kid I loved Lauren Child so much I learnt to draw in her style and would use it throughout all of my school projects (I later found out this was called plagiarism). I have clear memories of dreaming of being a writer and an illustrator until I became a teen and actually became quite interested in dentistry for no clear reason other than the money. Then in 2016 when I was 16 I realised I could study design and actually make a living from it so that’s when I actually began posting my art online and doing small commissions. I went to NCAD to specialised in illustration in 2018 and have been living my dream ever since.

Who has been the most supportive in your illustration career, perhaps your teacher, family, friends?

I was lucky to be born into a family of artists, I have two younger sisters who draw and animate constantly and I’ve always been supported creatively in my environment. My secondary school art teacher really nourished my work throughout my education and he grew to be a mentor and friend even after those years finished. I studied visual communications and illustration and all of my tutors along the way were incredibly supportive, talented and kind people who I feel lucky to be able to contact post my education years. I feel like I’ve connected with many people along the way who have fuelled my work process as I often take from relationships I have in real life to inspire my work world.

Did you always think art was something that was going to be a major part of your life?

Yes, it was never really a question to me, I sometimes felt like I was an image making machine as I don’t ever feel as alive as I do when I’m focused on drawing. Even if I couldn’t make a career out of it, I think art is in the way you exist. From arranging your jars in the press to dressing yourself to making an illustration, it’s just how I like to see things.

What is your favourite subject matter to illustrate?

I like variety in subject matter because I run through obsessions quickly, but at my works core it’s all about people! Humanity! The funny mundane. I love when I can capture slight surrealism but only enough to make you look twice. I like to find magic in the every day world. I often touch themes of femininity, nostalgia, mental health and childhood in my work but I like to push around those boundaries and explore any humanist topic through play.

How would you describe your style?

When someone asks me what kind of illustration work I do, I say it’s contemporary. It’s wonky, colourful and soulful. It’s quite 2d and guided by line-art. You just have to see it.

What is your favourite collaboration to date?

I’d say my favourite collaboration to date has been my music video with Faye Webster. I was lucky enough to shoot an email into the dark at the exact right time and it was a magical project to work on as she’s been in my top Spotify artists for years, and my number 1 of 2021. I worked closely with Hunter Airheart a super talented director and the time difference from New York made the working hours crazy, but it was worth it in the end to animate Faye’s personal favourite from the album. It was a huge learning curve for me as neither Hunter or I had done an animation commission before so we had to problem solve together when we hit walls. It created a mutual trust in figuring things out with dedication to the project. I’m proud of what we made and it’s opened some doors since.

What interested you about being represented by Illo Agency?

When Tom reached out to me I was so surprised I wasn’t sure what to think yet, but I was excited and felt like this was the right next step for me. I had been tirelessly marketing myself, creating new content, updating my folio on all platforms and I was getting tired of being on the freelance journey alone. I would love to focus a little more on making as it’s where my passion lies. The additional help from Illo would definitely bring me some more comfort in the earlier days of juggling my career. I’m also interested finding more community within my illustration world, I’m excited to connect with other artists also represented by Illo. It doesn’t hurt that I adore Illo’s commitment to being distinct and diverse, I think it’s so important and something I always try to emulate in my work, so I’m happy to be collaborating with that mindset.

Do you have a favourite author, film director, or designer?

My favourite author at the moment is Haruki Murakami, film director is Charlie Kaufman and I love many designers! To name some I’ve had on my mind recently; Kimberly Elliott aka linesbyher, Stephen Maurice Graham aka smgdraws and Raman Djafari! I especially love Raman’s Cold Heart music video for Duo Lipa and Elton John.

Are you working on any personal projects you can share with us?

I always have a few things running in my head or in my notes, but recently I’ve actually started working on a project that is totally based in word play. It started as a fun game I made up and would play with the people around me. I love to create funny word combinations and I have spent some time making alphabetic witty poetic one-liners. That’s all I’m going to say, I don’t like to talk too much about my personal projects before I finish them but I’ll tell you, this is a fun one. And I hope to expand my editorial practice with it.

Do you listen to podcasts? If so, do you have a favourite?

I can go through phases with podcasts, I don’t listen to very many but when I find one I like I stick around. I’ve been living abroad for a little while now and I tend to naturally get homesick sometimes so recently I’ve been really enjoying Irish podcasts. Keelin Moncrief’s podcast Same But Different has been a very comforting listen for the last few months, for the Irish comfort and the reassurance that your early 20s are turbulent and that’s okay. Podcast But Outside and Emergency Intercom get special mentions too.

If you have any questions or a specific project in mind, please do get in touch: [email protected]

Holly Jolley is a Chilean-British designer and illustrator.